An analysis of the proposal to install traffic lights and a tramway section to allow the Bala Lake Railway extension to cross the River Dee using the existing B4403 bridge. 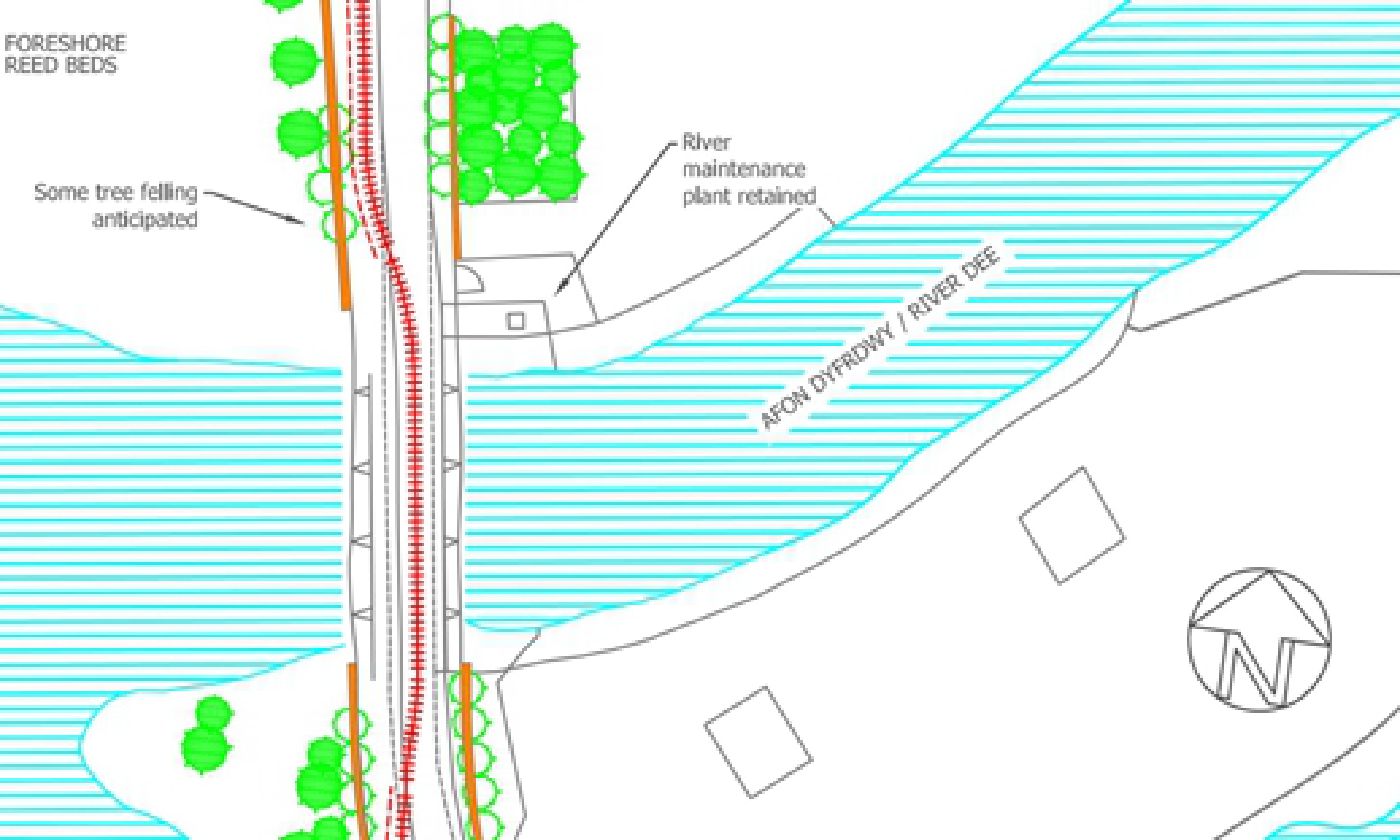 One of the biggest challenges the Trust faces in constructing the extension to Bala Town station is crossing the River Dee. The original plan envisaged the construction of a new bridge next to the existing B4403 road bridge. However, there are two issues with this plan:

The Trust is therefore putting forward plans for an alternative option and that is to construct a tramway section of railway on the existing B4403 bridge, which would resolve both of these problems. It should be stressed that for the time being, these plans are aspirational and there is still a lot of work to be done before they can be finalised. The diagram below shows the proposed route:

In order to fulfil this ambition, it was vital to commission a traffic survey to ensure that the proposed plans would be feasible. The Trust gratefully acknowledges the astonishingly generous contibution of a single donation that allowed the survery to be conduted in June 2016 by Croft Transport Solutions.

The conclusion of the report, which took into consideration the time the crossing would need to operate and accountiung for future traffic flow, reads as follows:

There should no traffic impact or highway safety issues with the principle of locating the Bala Lake Heritage railway extension utilising the proposed route along the B4403, the B4391 and Tegid Street.

The Trust is obviously delighted at the outcome of the report and is now working with the relevant authorities to take the plans forward,

A summary of the report is reproduced below.

Croft have been instructed by Bala Lake Railway Ltd to provide information to assist the determination of a forthcoming planning application for the extension of the of Bala Heritage railway.

This highways note will specifically consider the implications of proposals to provide level crossing facilities as part of the Penybont to Heol Tegid line extension.

It is proposed that the Penybont to Heol Tegid line extension will run in a north-south alignment from Penybont Station and cross the B4403 before then crossing the bridge over the River Dee and running alongside Tegid Street. An indicative alignment for the extension is shown in the diagram above..

As part of the proposals it is proposed that introduce formal signal control facilities at the B4391/Tegid Street and B4391/B4403 junction to enable trains to travel over this section of the extension without any conflict with pedestrians or vehicles.

To ascertain the existing traffic levels on the local highway network traffic counts were commissioned at the following junctions on Tuesday 14th June 2016.

The future year traffic flow factors have been derived using the National Traffic Model (NTM) factors adjusted by the TEMPRO regional and local growth factors for Gwynedd (Rural Main). The resultant growth factors for the AM and PM peak hours as shown below:

To assess the operation of the indicative signalisation scheme the LINSIG 3 computer program has been used. For the purposes of this analysis a 60 second all red stage has been included within the staging to replicate a train using the level crossing.

The 60 second time period has been derived using the information contained within the Office of Rail Regulators ‘Level Crossings: A Guide for Managers, Designers and Operators’ which was published in December 2011. This document states that barriers take up to 10 seconds fully descend or rise which leaves a total of 40 seconds for the train to clear the level crossing.

For the purposes of this analysis it has been assumed that the level crossing phase is called every cycle which over the peak period equates to it being called a total of 28 times which is extremely robust.

Table 1 below summarises the results of the 2026 Growthed Flows based on a cycle time of 125 seconds including 60 seconds 'All Red' stage for the level crossing.

As can be seen in Table 1 the proposed signalisation scheme is forecast to operate within its theoretical capacity even based on the particularly robust assumptions detailed above. The forecast level of queuing can be accommodated without resulting in any blocking back of either of the two signalised junctions.

This summary note has considered the traffic and transportation issues relating to proposals to extend extension of the of Bala Heritage railway between Penybont to Heol Tegid. The following conclusions have be drawn within this summary note;

In conclusion, there should no traffic impact or highway safety issues with the principle of locating the Bala Lake Heritage railway extension utilising the proposed route along the B4403, the B4391 and Tegid Street.